August 26, 2019, Brooklyn, NY – The Kingsborough Art Museum is pleased to announce its fall exhibition, I stand here, like the sun that frightens the cold/Aquí me paró, como el sol que asusta el frío, an exhibition of photographic collages and mixed media works by artist Antonio Pulgarin. The show is Pulgarin’s first solo exhibition in New York City and will be organized with Guest Curator Edwin Ramoran. The exhibition will be on view from October 30 to December 4, 2019; an opening reception will be held on October 30 from 3:00 – 5:00 pm.

Antonio Pulgarin is a Colombian-American Lens-Based Artist who utilizes photography, photographic collage and mixed media to create conceptually focused works that tackle the themes of cultural and queer identity, memory, and displacement. These works utilize the family archive, patterned fabrics and additional printed source materials. The final two-dimensional compositions often incorporate cut out patterns to obscure sections of the original archival image, often blocking out an entire figure. What we see is an incomplete family portrait, intentionally erased persons, deconstructed moments and new memories. In his work, elements of nostalgia, personal narrative- relating to his heritage, and notions of masculinity are all present. The collaged elements remind the viewer that these images have been intervened, brought to the present and reimagined.

The Kingsborough Art Museum (KAM) presents a solo exhibition of works by Antonio Pulgarin, a Lens-Based artist whose collage pieces question and confront issues of gender, cultural and national identity, and masculinity. 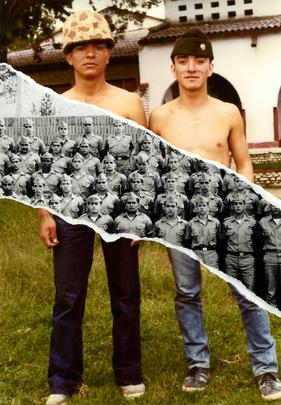 I stand here, like the sun that frightens the cold/Aquí me paró, como el sol que asusta el frío will feature works from chapters one and two of Pulgarin’s ongoing series Fragments of the Masculine. This body of work is deeply informed by Pulgarin's connections to his Colombian heritage, his connections to Dominican culture and to the Latinx narrative in America. Chapter One of this series uses an archive of found images of his uncle and biological father while chapter two utilizes both created and found imagery of his Dominican stepfather in order to further examine these themes.

The archival images of his biological father and uncle represent specific times in the lives of these two men—including photographs from the time his uncle spent in the Colombian military in his youth, and Polaroids of his father from his time in prison. As an adolescent, it was only through these photographs that Pulgarin was able to connect with these men, which inherently linked the depiction of the military and the prison system to his ideas of masculinity.

Pulgarín approaches the images of his stepfather from a different vantage point, as his stepfather helped raised him, these works are informed by the memories formed throughout the years that he was first introduced to Dominican Culture. Pulgarín begins to examine and dissect the relationship the two have shared over the years as he began to travel with his step father to the Dominican Republic. Through these new works he continues to examine how this relationship influenced his ever evolving ideas on masculinity within the Latinx community, his connection to both his step-father and to Dominican Culture, and to his identity as a Queer Latinx individual.

Through this work, Pulgarin seeks to challenge the construct of Latino masculinity (also known as Machismo Culture), while re-contextualizing the fabric of his own identity and excavating his own personal family history. Each image in this series presents a deconstructed version of the original archival images as he has interpreted them, incorporating culturally specific materials as well as the colors of the Colombian and the Dominican flag. These images place an emphasis on the fragmented relationship he shares with both his culture and these central figures in his life.

Antonio Pulgarín lives and works in New York City. He studied at Kingsborough Community College, later earning his BFA from the School of Visual Arts. His work has been exhibited at the Fort Wayne Museum of Art, the Brooklyn Museum, Aperture Foundation, BRIC, The Margulies Collection at the Warehouse, Photo LA, Photoville, among others. His work has been exhibited internationally at The International Photo Festival Leiden and later in this year in London. His work has received honors from YoungArts, The Scholastic Art and Writing Awards, EnFoco, The Magenta Foundation, Latin American Fotografia, American Photography, and PDN Photo Annual. Pulgarin’s works have published in Vice, BESE, Slate, LensCulture, The Huffington Post, UnSeen Magazine, Visual Arts Journal and Photo District News. Earlier this year, Pulgarin was selected as a Fellow of the AIM Fellowship program at the Bronx Museum of the Arts.

The Kingsborough Art Museum is located in the Arts & Sciences Building, on the campus of Kingsborough Community College, 2001 Oriental Boulevard, Brooklyn, NY, 11235. General museum hours are Monday-Friday, 10:00 am to 3:00pm during the regular college semesters; closed January, February, July, August, and all holidays recognized by the college. Admission is free and open to the public. For more information, please contact the Director, Brian Hack, at 718-368-4817.