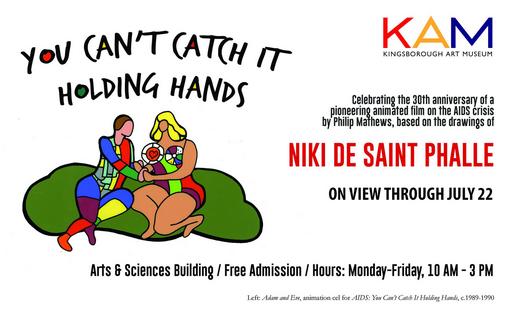 UPDATE: Please note that the Kingsborough Art Museum is currently closed, and the current exhibition has been put in hold until a decision is made to reopen the campus.  Please visit this website for updates.  We apologize for any inconvenience.  Be well, be safe, and we hope to welcome you back to the gallery soon.

The Kingsborough Art Museum (KAM) is pleased to announce its opening exhibition of the spring semester, AIDS: You Can’t Catch It Holding Hands.  An opening reception will be held at KAM on Wednesday, March 11, from 3:00-5:00 pm.  The exhibit, organized by Guest Curator Elisabeth Tiso, celebrates the thirtieth anniversary of a pioneering animated film on the AIDS crisis by Philip Mathews, based on the book of the same title written and illustrated by his mother, the French-American artist Niki de Saint Phalle (1930-2002).  Best known for her vibrant, playful, and often provocative sculptures and anthropomorphic architectural forms, Saint Phalle, under the suggestion of her Swiss immunologist, Dr. Silvio Barandun, collaborated on AIDS: You Can’t Catch It Holding Hands, a book aiming to educate the public, and teenagers in particular, about the disease.  Niki addressed the book to her son Philip, using colorful drawings and ornate text to convey what was then known about AIDS. This first book was published in Europe and the United States in 1986 and 1987, respectively, where it was met with good reviews.   The aim was to widely disseminate the book in schools, libraries, museums and art galleries; it was hoped that its simple yet serious message would not only educate the public but also dispel some of the hysteria and fear that had caused ostracizing and harsh treatment towards those that were diagnosed and suffering.

In 1987 Mathews proposed to Niki and Dr. Barandun that in order to reach a larger audience, he adapt the book into an animated film.  He subsequently produced a series of short films, each thirty seconds in length, which could be shown on television, in the cinema as part of trailers, and in other venues that could reach the widest audience possible.   Later he produced a longer seven-minute version filmed on 35 mm film.  Plans to disseminate the film in Africa (where AIDS is still a major health emergency) were also discussed.   Mathews directed and produced the film in New York.  Upon its completion in 1990 it was purchased by the governmental Agence française de Lutte Contre Le Sida (The French Association for the Fight Against AIDS).   It premiered in Paris at the Musée des Arts Décoratifs in 1990 and was later shown at that city’s Museum of Science.  In addition to providing the original drawings from which the animated film was created, Niki de Saint Phalle herself appears in a live-action sequence made for the film’s introduction and conclusion.

In celebration of the film’s anniversary, KAM is showing AIDS: You Can’t Catch It Holding Hands for the first time in the United States.  The film will also be shown at MoMA PS1 as part of the exhibition Niki de Saint Phalle: Structures for Life (April-September 2020).  The current KAM exhibition, the first devoted to this project,  presents original drawings by the artist, as well as animation cels and ephemera related to the film and its reception.  Students, faculty, administration, staff, and the general public are invited to the opening reception, and/or to view the exhibition during KAM’s operating hours, Monday through Friday 10:00 am – 3:00 pm.  The exhibition runs through July 22, 2020.