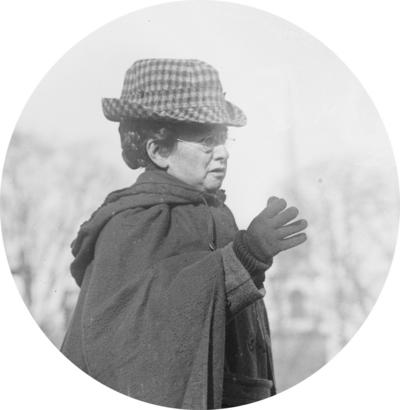 March 6: The Standard Union (Brooklyn) reports that Ida Craft was appointed as an auditor for the upcoming year.

October 29: The Brooklyn Daily Eaglereports Ida Craft's serving as secretary for a meeting of the Bedford Equality League.

November 4: Ida Craft is reported in The New York Sun as having served as a delegate to a convention of the Woman Suffrage Association, representing the Women's Christian Temperance Union (W.C.T.U.).

November 14: The Brooklyn Daily Eagle reports that Ida Craft served as the chair of a meeting of the Elizabeth Cady Stanton Political Equality League of the Eastern District.

November 2: Ida Craft elected a delegate to the National Woman's Suffrage Association convention, to be held in Minneapolis in June 1901.

December 16: The suffrage pilgrims set off for Albany with a group of 27 suffrage workers.  Along the way they face harsh winter weather and the occasional jeers of anti-suffragists. Adolph Major, a supporter of the cause, followed the group by car with "peanuts, chocolate, and sandwiches that will furnish luncheons between towns," as well as suffragist literature and additional clothing for the hikers.

December 28: Only a smattering of suffragists, including Rosalie Jones, Ida Craft, Lavinia Dock, and Sybyl Wilson--remain by the time they reach Albany shortly after 4:00 pm.

January: Ida Craft is elected to the board of electors, Brooklyn chapter of the Woman's Suffrage Party.

February 10: The suffrage pilgrims from New York set off on a hike to Washington, DC for the Women's Suffrage Procession.

May 21: Death of Eleanor Voorhies Perlee Craft. Ida Craft serves as the executor of the estate, and receives a substantial inheritance as well as the house at 294 Stuyvesant Avenue.

July 19: The Chat (Brooklyn) relates Craft's recent activity as Suffrage leader of the Fifth Assembly District.  On July 15 Craft spoke at Union Square, NYC, for the Woman's Suffrage Party.  Craft noted that fall 1913 would be a particularly vigorous time for the suffrage movement.

December 20:  The Chat (Brooklyn) reports that "Colonel" Craft and "General" Rosalie Jones have just returned (Dec 6) from a trip to Washington, DC, calling Craft "the backbone of her party."

January: Ida Craft and a group of suffrage workers, including head for Albany on the second major hike to the state capitol.

September: Craft returns from a speaking tour of Montana, Nevada, Nebraska, where women's voting rights were on the ballot, as well as a number of other western states where women already had the vote (Oregon, Washington, California, Utah, and Colorado).

September 30: The Brooklyn Woman's Suffrage Association honors Ida A. Craft for her tireless work for the cause.  Five hundred people attend the event, held at the residence of Louise Woelfle, 98 S. Elliot Place, Brooklyn.

November 14: Craft moves her home base to the Hotel Martha Washington, as she intends to spend the winter months traveling in support of the suffrage party.

As national suffragist leaders such as Carrie Chapman Catt (1859-1947) and Alice Paul (1885-1977) take more public roles in the movement and the push for the 19th Amendment, Ida Craft spends more time lecturing, traveling, and picketing in Washington, DC.

Summer: Ida Craft travels to Alaska and the Western states to push for  suffrage legislation.

April: Ida Craft spends much of her time in Washington DC, picketing in solidarity with the National Woman's Party.

September 6:  The Brooklyn Daily Eagle reports that Ida Craft has broken away from the Woman's Suffrage Party to join the National Woman's Party.  After a brief respite in Brooklyn, she states she will return to Washington to picket through the winter.  In the article she rails against the conservative nature of the Woman's Suffrage Party, saying, "They are holding back the movement.  They do not realize that just as methods of carrying on warfare have changed so have methods of gaining suffrage."

The 19th Amendment to the United States Constitution is passed in the Senate.

August 26: After Tennessee became the 36th and last state needed to vote for the 19th Amendment on August 18, woman's suffrage becomes ratified as the law of the land.

Ida Craft celebrates her 80th birthday with a reception in her honor.

September 14: Ida A. Craft dies in Pearl River; her estate is bequeathed to her niece, Eleanor Craft Bartindale.